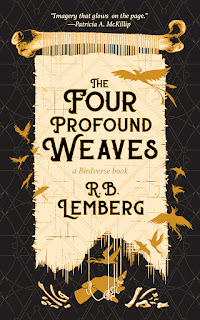 A richly-woven, multi-faceted work of fantasy about time and hope
There is a structure that lends itself well to fantasy or a certain strain of it: a great evil descends and destroys the sheltered home of a young protagonist, sending them out into the world, on a journey where they will come into their own and defeat the evil. If you look hard enough, you can see the bones of that plot in R.B. Lemberg’s The Four Profound Weaves, but they twist that plot skillfully, introducing elements that change the story and make it very different from your typical Campbell-flavoured fantasy.

A lot of the differences come from the characters. Uiziya e Lali and the nameless man, the two narrators and protagonists, are not wide-eyed youths; they are both in their sixties, they have or had families, they loved and lost. At the same time, their personal development is stunted in various ways: the nameless man delayed his transitioned at the request of his partner, while Uiziya hasn’t completed her training in the art of magical weaving. Thus we still get a coming of age story, but one that shows that life isn’t over once you hit 35, there’s still room to grow and change, even if it’s harder. At the same time, it is a story that is enriched by the weight of everything they’ve been through, the vagaries of their life and the losses they suffered at the hands of the Collector.

Another aspect that contributes to the richness of the story is the worldbuilding. The Birdverse, of which The Four Profound Weaves is a part, is not the typical vaguely European, quasi-medieval setting and the story doesn’t focus on wealthy nobles, as the Western European-style fantasy all too frequently does. It focuses instead on ordinary people and the worldbuilding consists of their cultures and customs rather than fictional family trees. As a result, an archetypal story takes place in a world that feels very much lived-in, presenting interesting ways of conceptualising gender, family structures, etc. In terms of worldbuilding Birdverse seems to have a lot in common with domestic fantasy.

At the same time, though, The Four Profound Weaves, is essentially a heroic fantasy story, telling of a struggle against an evil ruler: the Collector, who steals valuable artifacts from the cultures he conquered and locks them away in the palace as a means of “protection” (in clear parallel to the looting that colonial powers undertook in real world) – but it’s more of Sam and Frodo’s walk to Mordor than armies and battles. The protagonists are no warriors, there is no prophecy that foretells their triumph. Their journey is filled with fear and doubt, dead ends and failures, which feels very relatable – and yet Uiziya and the nameless man push on because of their friendship with each other. The cost of resistance is paid with emotional and physical hurt as they are tortured and wounded in ways that cannot be completely cured (and Lemberg focuses a lot on the aids, like canes and wheelchairs, that they require during their journey). And in the end it's not military power that prevails against the Collector. If there is anything that can topple dictators, it’s helping those who were hurt by them and a collective struggle. There will be bodies, dead or wounded, but eventually they will reach such numbers that their weight will crush the oppressors – as long as we, the living, keep remembering, and giving them voice, and pushing onward.

It is a grim note of hope – with an awareness of the terrible cost of fighting for justice – but it’s hope nonetheless.
Autor: Artur Nowrot o 18:46